That damn Elton John song kept running through my mind.

I'm back in Philadelphia for this year's Liberty Bell Open.  Unlike last year where I spent the weekend being pushed around in a wheelchair, I am quite mobile and free to move about the playing room as needed.  That's a good thing because I played a 5 hour and 48 minute game last night in round .  I drew with a 1900 from upstate NY who I've played a few times before. I'm so glad to travel to Philadelphia to play players from New York.   Italics for the sarcasm challenged.  :-)

I will post the game later.  I'm about to start round 2.  I decided to play up in the under 2100 section.  Am I nuts? Maybe.  But I did get a draw against a higher rated player.  I'm playing the 4 day schedule which means all 7 of my games will be 40/2 SD/60.  I can't use the "I had trouble transitioning from the fast control to the slow control" excuse.  Last night's game lasted longer then my last 6 games this week combined.  That's what happens when I play 6 games of "cracktion" in a week.  Last night I scored a half point less then my other 6 games combined.  Yep it wasn't a great week.  Lots of clock issues. More on that later.
Posted by Polly at 10:53 AM 4 comments:

It's The Most Blunderful Time of the Year! 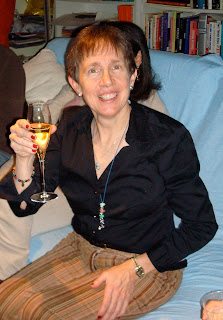 Cheers! Happy New Year!
A belated Happy New Year to all! It's hard to believe a year has passed so quickly. It seems like last week I was tumbling down the stairs and messing up my Christmas, New Years, and Tae Kwon Do training. Fortunately I managed to stay upright while going up and down stairs this past December. The only thing that was going down this December was my rating. Started off the month at 1731 and by the end of the month I was sitting on my floor.

The last two days of 2010 certainly contained some interesting games for me. However like most of the year the losses out numbered the wins. The clock played a big part in most of Thursday's games. In round one I was holding my own against a 2200 until I imploded with seconds left on my clock. Round two was probably more frustrating as I totally outplayed a 1997, but couldn't finish him off because I panicked in time pressure and took a draw in the position below with two seconds left on my clock. 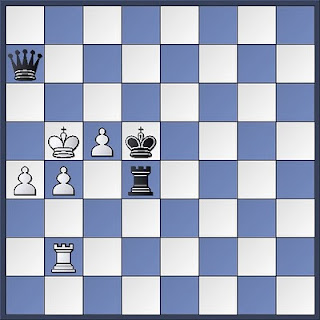 Black to move.
It's mate in 5, but I couldn't find it quick enough and I didn't want to lose on time. 1...Qb8+ 2. Ka6 Kc6 3. b5+ Kc7 4. b6+ Kc6 5. a5 Qb7# (I tried to hide the moves, but couldn't quite find a color that matched the background.) One of the little kids who plays on Thursday night asked me why I took a draw since it was such an easy win. It's easy when you have time, but not so easy when the clock looms large. All I saw was when I stop checking and bring my king in that the white pawns start checking my king. Taking the draw in that position was not my last blunder of the year. In fact it wasn't even my last blunder for that tournament. I would end out losing rounds 3 and 4.

My last blunder of 2010 would come on the last day of 2010. In my case maybe the tournament should be named Your Last Blunders of 2010 since I blundered more the once during the course of the tournament. It started right in round 1 as I played poorly against WIM Iryna Zenyuk (2320) and got crushed. I don't expect to win a match up like that, but I would have liked to put up a better fight. I just made the break in round 2 so I got paired down to a 1340. He offered me a draw late in the game which I turned down. Several moves later I overlooked a fork and found myself in the following position. 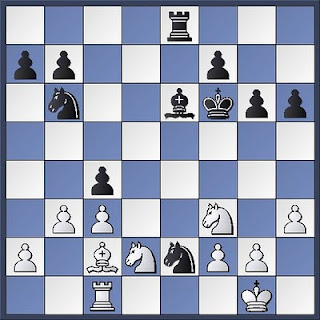 When he played the move 26...Ne2+ I was about to say jokingly, "Do you still want that draw?" But before I could even ask the stupid question, he offers me a draw. I was rather stunned and asked "Why?" He was afraid of the time difference on the clock and felt he couldn't win it with the time he had. Sound familiar? However he had 01:49 on the clock to my 09:27. That seems like ages especially in comparison to the 2 seconds I had on Thursday. I considered turning down the draw because I really didn't deserve it. However he wasn't acting like my "not so secret admirer" who just can't stand the idea of winning against me. He really didn't feel like he had the time to win the position. I did accept the draw offer, but told him he should have played it out. I guess this draw was payback for Thursday's draw.

Walking into that fork was not my last or biggest blunder of the tournament. That came in round 3 against Guy Colas. He clearly has my number even though our ratings are usually within 50 points of each other. We've played 33 times and he's beaten me 22 times. Usually he gets me on the clock. He tends to play much faster then me, so often our games have come down to my flagging or imploding in time pressure. The clock was not a factor in this game. I can't even blame it on losing focus or getting overconfident. In one of my rare moments of wanting to sac something, I chose to sac the wrong piece. The position below just screams "Sac something to bust open the position!" 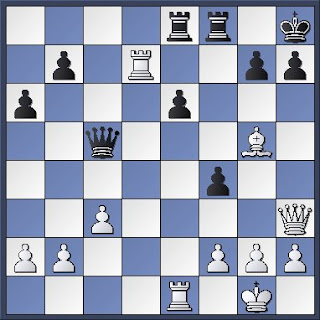 
Since my mistake was not due to the usual overconfidence or lack of focus issues I didn't beat up on myself. Instead I joked with Guy and said "I think your son is rubbing off on me." His son had played a game recently where he had sac'ed a rook in a position he was winning and ended out losing. Although I clearly had blundered I was satisfied with the fact that I had tried to be aggressive and not play like a chicken.

I bounced back with a win in round four against a grossly under rated high school kid. His rating on the wallchart was posted as 790. That was a very old rating from 2009 and since then he has been playing again and has a rating of 1100. He played much better then that rating, and it was not an easy win. However it was a win, and after an ugly loss I often fall apart for the remainder of the tournament.

In the last round I was paired against a 1750. I was a little surprised I was playing someone so close to me in rating, but there was no one else lower then me who I had not already played. A win would give me an even score, but wouldn't lead to any rating gain. My year would end as it started with me sitting on my floor.

After I made my 12th move my last round opponent got up and left the room with his clock running. I thought that was a bit odd given the short time control of G/30. I used the moment to go to the bathroom since that's something I generally don't want to have to do during time pressure. I noticed he was staring at the wallchart. I assumed that he was trying to figure out if he could win money or not. It certainly had not entered my mind that I might possibly win money in this tournament. I was just licking my wounds and recover my pride after the round three ugliness.

When I came back from the bathroom he pointed out his move and said "I offer you a draw." That kind of surprised me. I'm used to lower rated kids offering me early draws, but not slightly higher rated adults. It was tempting to go out and look at the wallchart, but I didn't want to make it obvious that I suspected why he was offering the draw. Instead I said "I'd think about it." I'm not sure why I even said that since on general principles I refuse early draw offers. I played my move, went out and looked at the wallchart. Now I could see why he wanted the draw. A draw would give him the Under 1800 prize. If I won I would get the under 1800 prize. A draw would not help me since he had 2 points and I had 1.5. I had to play for a win.

Playing for a win when I'm Black and the opponent is playing very safe is hard. I kept trying to avoid trades and come up with some kind of play. I did miss a chance to win a pawn. Even then it's not an easy win, but it certainly would have given me better chances. He did finally get his draw and the Under 1800 prize. Here is that game.

At least 2010 ended with something besides a loss. 2011 started with a win last night. I filled in for one round. At the moment I can say I'm undefeated for 2011. Give me a few days and that will probably no longer be the case. Who knows where my chess journeys will take me in 2011. Last year I did not play in any new states. I can't count Victoria, British Columbia as a new state. Perhaps this year I can add a state or two to my quest to play all 50. Hawaii and Alaska would be good choices. However it's more likely I'll play some states a little closer to home.
Posted by Polly at 5:19 PM 8 comments: