I'm alive and well despite possible rumors to the contrary.  I got back to New York on Tuesday after a rather uneventful flight back from Seattle.  However that's the way I like flights to be.  The only excitement I like on flights are surprise upgrades or meeting someone interesting on the plane.  Neither of that happened.

The ferry ride from Victoria to Seattle was eventful.  We mere mortals of the tournament had the pleasure of sharing ride back with tournament winner, WGM Nino Maisuradze.  She was leaving from Seattle to head back to France.  We had a delightful time talking about the tournament and other things.  Nino is originally from the Republic of Georgia.  She knows my friend IM Rusudan Goletiani who also was from Georgia.  We also celebrated Nino's perfect 6-0 score with a few bottles of wine. 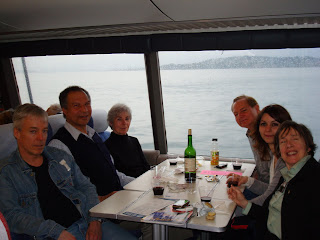 Troy Pendergraft, Hanniegn & Sharon Pitre, Mike Schemm, WGM Nino Maisuradze, and moi.
Cheers!!
The second half of my tournament was much like the first half.  One win and two losses, so I finished with a 2-4 score.  I didn't feel like I played horribly, but I was a little disappointed in how I handled the ending in two of the games I lost.  More on my games later. 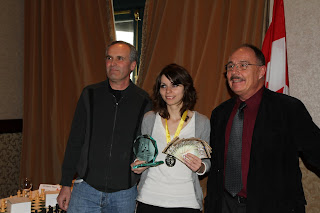 Organizer Brian Raymer, WGM Nino Maisuradze,  Mark S. Dutton, IA
The traditional "Show me the money!" pose.
As to the rest of the winners; The biggest surprise of the tournament was the strong play of 2nd place winner,  Loren Brigham Laceste.  He scored 5.5. He's an upcoming junior player from Vancouver who came into the event rated 1923.  He beat 3 masters including IM Lawrence Day. 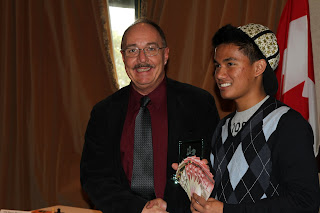 Mark Dutton, IA and Loren Brigham Laceste
The tournament had a number of sponsors including Godesschess who gave $250 for the top five women scorers in the tournament.  This was in addition to any other money women players won.  The winners of those prizes were:
1st: WGM  Nino Maisuradze  $70 6 points
2nd: WFM Valeria Gansvind $60 4 points
3rd: WCM Alexandra Botez $50 3.5 points
4th: Sarah May $40 3.5 ponts
5th: Alice Xiao $30 3.0 points
Other sponsors included; Chocolaterie Bernard Callebaut  who provided the chocolate Easter eggs that were at each board on Easter morning, Hotel Grand Pacific who hosted the event, MonRoi who had live game coverage on their site (you can find my rounds 4-6 games), and Bard and Banker Scottish pub where we had a get together between rounds on Sunday.  Also sponsorship was provided by Imax Theatre, Orca Spirit and Downtown Victoria Business Association.
In addition to the 86 player Open section there were an additional 18 players in the Under 1400 section.  The Under 1400 section was won by Leo Stokes with a perfect 6-0 score. Complete results of the tournament can be found here. 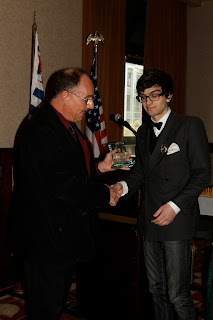 Leo Stokes, Under 1400 Champion
My 2-4 score wasn't worth anything in the tournament, but I scored high in the style department with my chess themed Easter outfit.  I won best dressed player. 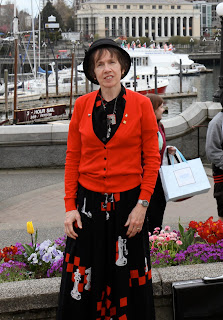 Polly and her "not ready for the Royal Wedding" hat.
Was I glad I made a return trip to the Grand Pacific Open? Yes! Will I be back in 2011?  I sure hope so.  The tournament has a true European flair to it.  All equipment and clocks are provided.  The pairings go up well ahead of schedule.  In fact the morning round pairings are posted the night before.  Those who are inclined to prepare for the next round opponent can do so.  The hotel is very nice and close to the ferries that come from the United States.  How often can one get off a boat and walk to his or her hotel?  Free Internet and free use of a fabulous health club are wonderful benefits to one's stay.  My biggest complaint with many hotels is having to pay extra for Internet and use of the gym.  Score one for Hotel Grand Pacific.

For anyone looking for a wonderful alternative to the usual mega-bucks weekend Swiss should really consider this tournament next year.  Make a little vacation out of it by spending a few days in Seattle, Victoria or Vancouver before or after the event.  Maybe we can have the Castling Queen Side tour.