This past weekend I directed at the state scholastic championships.  I worked on the floor as opposed to my normal computer duties that I perform at our local events.  When I'm the computer tournament director my main responsibilities are input the scores, do the pairings and post the results.  For the most part I'm fairly immune to the dramatics that sometimes occur on the playing floor.  There are times I can end out contributing to the dramatics because a result was reported incorrectly (players' or floor TD's error) or I had a case of dyslexia and put in the wrong result. (my error).  Fortunately it doesn't happen often and it's usually pretty easy to fix.

Working on the floor at tournaments can be far more challenging when faced with difficult situations.  Touch move disputes tend to be the bane of every tournament director's existence.  It takes a patient tournament director to be able to ask the right questions and come up with a fair decision based on the answers given by the players involved.  One has to be very diplomatic in handling a situation of one player's word versus the other.  As I explained in this post a few years ago there are a number of things the TD can do to try to resolve the back and forth of "He touched the bishop." "No I didn't!".  Most of the touch move disputes I dealt with over the weekend were pretty straight forward and the final decision didn't impact what was going on in the position.  However my luck ran out on Sunday in the K-1 section.

I was called over to this position by the player with White. He claimed Black touched the pawn. 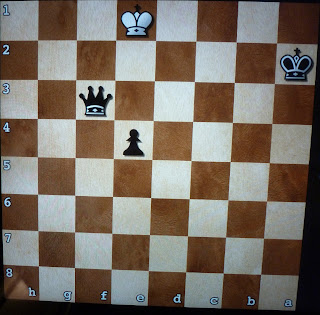 Before looking closely at the position I'm thinking to myself, "What's the big deal about touching the pawn?"  I asked Black if he touched the pawn.  He said "Yes, but I don't want to move it."  I tell the player he has to move it.  At this point he bursts into tears and says something to the effect of "It was an accident.  I didn't mean to move it."

At this point I realize that moving the pawn to e3 is going to turn this totally won game for Black into stalemate allowing White to get out with a draw.  I tell Black that it's touch move and that he has to move the pawn.  He then proceeds to tell me that he doesn't know the touch move rule and that because of that he should be able to make a different move.  I tell him that it doesn't work that way.   The rule is the rule.  He continues telling me that it's not fair because he didn't know the rule.  I look at the pairing sheet and notice that he has a rating in the high 900s.  A first grader with that rating clearly has some idea of what he's doing and certainly knows about touch move. He keeps insisting that since he didn't know the rule or that he forgot the rule that he should not have to move the pawn.

I have to come up with a simple explanation of ignorance of the law doesn't excuse one from breaking the law.  Quick! How do you explain that to a 6 year old?  I used an analogy of my going through a red light. I told him that even if I tell the cop that I didn't know I couldn't go through the red light, I still was going to get a ticket.  Same thing applies here.  "Move the pawn."  The tears didn't stop, but he did finally make the pawn move.  I try to be patient and kind in these situations, but at the same time I want to just tear my hair out and tell the kid "Cut the crap. I know you know the rule. Stop giving me this sob story, and just move the #$& pawn!" However what I may be thinking can't be said out loud. Instead I have to make a fair ruling and try to help the kid learn from the experience.

That was only one of the draw dramas I dealt with over the weekend.  Stay tuned for part 2.

It's been a pretty mellow event for me.  Having gotten over the flu I've been laying pretty low.  My results have been rather average.  I've lost to 2 experts, drew an 1800 and a 1500.  I beat a 1345.  The 1345 is the one little kid I've played this weekend.  Be still my heart, I've played 4 adults.  I don't remember the last time that happened.  No game against a lower rated kid would be complete without some story behind the game itself.  We were paired against a team of 4 little kids.  Our 3rd and 4th boards won pretty quickly.  Our 1st board and I were having to work a little harder on our games.  I had won a pawn in the opening, but I didn't exactly take full advantage of my material edge.  We reach the following position after I played 30. Qb3 pinning his knight on d5. 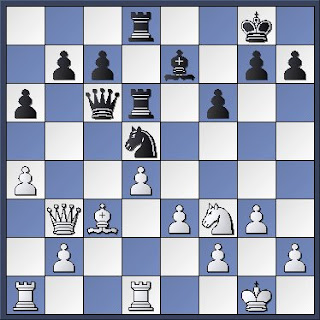 I have the threat of 31. e4, but I figured he breaks the pin either by moving his king or put his rook on e6.  I'm simply looking to buy some time while I figure out what I want to do about his threat of Nxc3, with a discovered attack on Nf3.  The truth be told I didn't really have any great plan up my sleeve.  I'm going to have to either move my knight or play my king to g2.

The kid reaches for the knight and then pulls his hand away.  He reaches for it again, and pulls his hand back again.  I keep thinking to myself "He's got to see the pin which is why he's hesitating."  The reality is he's totally missed the pin and is probably trying to figure out where the trap is after 30...Nxc3, 31. bxc3 Qxf3.  Finally he plays the move 30...Nxc3??  I stop the clock and tell him he's made an illegal move.  I know the rules about illegal moves and touching opponent's pieces.  However I decided I would let the tournament director explain the rule to him.  I get the tournament director and point out what happened.  He asked me if my opponent touched my bishop.  I said "Yes.  He took the bishop with his knight and pressed the clock."  The director informed him that he would have to capture my bishop.  The problem is the only legal capture is with the queen.  The kid was rather upset and immediately resigned.  I'll give him credit for that.  At least he didn't make me play the position out to mate.

Afterward I saw the director in the hallway, and he said in all the years he's directed that's the first time he's had a situation like that.  Most of the time there's been no legal capture or if there has been it hasn't been so devastating.  It wasn't the prettiest way to win, but a win is a win.

Here are a few pictures from the gimmick contest. 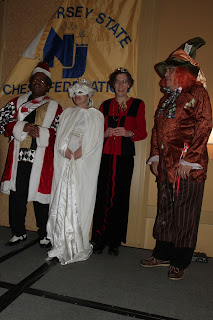 Alice in Wonderland theme with the red king and queen.
Along with the white queen and the Mad hatter. (2nd place) One match left to go.  We're 3-2.  We'll probably get paired up again.  I have no idea what's happening at the other end of the ballroom where the serious games are happening.  I'm don't know how many perfect scores there are.  I'm a little too tired to care.  That's the problem when recovering from the flu.  I'm preserving what strength I have for my games, such as they are.
Posted by Polly at 1:24 PM 2 comments:

Last night was a sad occasion in the annuls of chess in New York City.  Steve Immitt held his last "4 Rated Games Tonight" at the New Yorker Hotel.  Known as "America's Longest Running Action Tournament!" it had been going on since 1987.  I guess like a good Broadway show, it closes sooner or later.  Hopefully like many a great Broadway show, there will be a revival of Steve's action show.

I wish I could say that I had one more good chapter to add to Polly's Thursday follies, but alas a nasty case of the flu caused me to miss closing night.  Unfortunately when one teaches chess to kids there's not only the risk of being exposed to bad chess playing, but the risk of being exposed to cooties of the worst kind.  All the hand-washing and flu shots could not save me from this nasty bug.  Who knows if it was the kindergarten kid who kept coughing in my face despite my pleading with him to cover his mouth, or the 2nd grader that kept putting the pieces near his face who gave me this lovely flu.  All I know is that it's been a lousy week, made worse by missing Steve's last Thursday tournament.

As of this statistics post written on May 2, 2009 I had played 790 games in Thursday night "cracktion" events.  I've never gotten around to updating those numbers with the games played since I made that post, but my guess would be that I probably played another 300 to 400 games in the event.  A new reader might ask why I refer to the event as "cracktion".  Considering how many games I played in that particular tournament one can see that despite how bad it might be for one's game it's like crack.  Very addicting.

Many of the games were entertaining, although at times for the totally wrong reason.  At other times the stories behind the games were very entertaining.  There were many colorful characters that I encountered over the years.  Some them I encountered all in one night.  If nothing else the tournaments provided me with a lot of the material used for this blog.  Perhaps that's why I haven't been writing much because I haven't played in the tournament much in the last year.  Actually that's not really the case.  Much of 2012 was spent focusing on getting my 2nd degree black belt in Tae Kwon Do.  The feat was accomplished in November.  Preparing for that test was more stressful then having one second on my clock in a winning position. 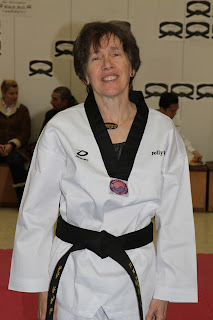 With that out of the way, there may be more time for blogging and playing chess.  Time will tell.  Tomorrow I'm off to Parsippany for my 33rd US Amateur Team - East tournament.  I get a break from getting hammered on board one this year.  I'll be playing board two with most of the usual suspects from my chess club.  I'm not sure how much of a break it will be.  My post-flu track record at chess tournaments isn't so good.  As Alfred E Neuman would say "Who me worry?"  I may skip a US Open or New York State Championship here and there, but the USATE is another story.  I still regret skipping it in 1991 otherwise I'd have a very impressive streak of consecutive years played.  Though 22 years in a row isn't too shabby.