....where my blog posts on the US Open are, there aren't any.  It's not because I didn't feel like writing about my usual US Open agony.  There was no US Open agony because instead of agonizing over whether or not I should take a bye in round 7 after cramming in six games on Thursday and Friday, I was doing this.... 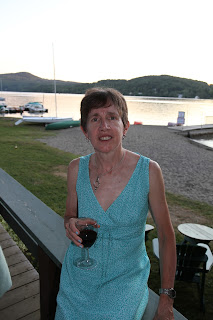 Instead of spending Saturday and Sunday trapped inside sitting in delegates meetings I was doing this... 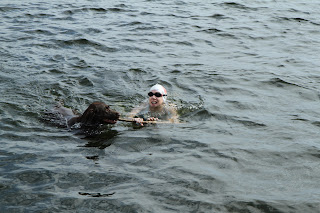 Swimming in Lake Massiwhippy
And this... 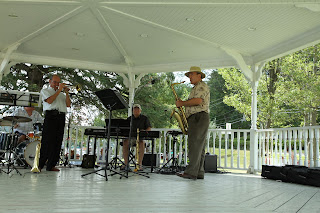 Listening to jazz on Sunday afternoon.
The only agonizing had been in May when I found out my Uncle Charlie's 90th birthday celebration was going to be the same weekend as the US Open.  There really wasn't that much agonizing.  Let's see....  Orlando, Florida or North Hatley, Canada in August?  Let's see... Sitting in a hotel at the Orlando airport for 5 days playing chess and attending meetings, or spending 4 days at a charming inn in Canada on a beautiful lake hanging out with family and friends. 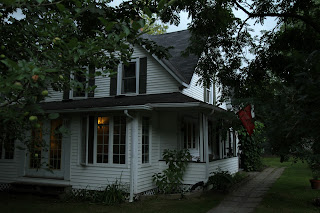 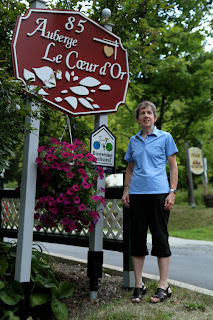 Yes dear readers, I do have a life outside of chess.  The US Open comes around once a year.  A 90th birthday only comes around once in the person's lifetime.  That's assuming he or she lasts that long.  Sadly I did not get to celebrate a 90th birthday for either of my parents, so when I still have relatives who reach that milestone it's worth traveling far away from the chess scene to celebrate with them.

In case you think this is just a filler piece while I work on my  New York State Championship posts, let me set the record straight.  You'll have to wait until 2012 at the earliest for my next report on the New York State Championship.  That's because when I was in Canada with my sister, I decided I would spend Labor Day weekend in San Diego with her, instead of in her empty house in Albany while playing in the state championship.

This was the summer of all things not chess.  I played at my club here and there.  I made a token appearance at the Marshall for Thursday cracktion.  Almost a year later I played Black against Scot Mc Elheny again.  Although the result was the same, it was a much longer game.  Maybe this should be filed under Freaky Friday.


Alas summer chess vacation is over.  I direct my first scholastic tournament this weekend, and I start teaching my first chess classes next week. Last night I showed my face at the Marshall once again.  I think they wondered if I was still alive.  Rumors of my chess death are greatly exaggerated.   Expect to see more blog posts as I try to figure out if I really can play this infernal game called chess.
Posted by Polly at 11:55 PM 6 comments: