It's Been a Ferry Long Time

Polly's chess traveling road show is on it's way.  I've made my 3rd annual appearance at the Grand Pacific Open in Victoria, British Columbia.  I debated whether or not I wanted to go.  I've not been playing much chess this year.  My addiction to Thursday Night Cracktion has ceased for the time being.  I did made my 36th appearance at the USATE where I played some really crappy chess on Saturday and Sunday.  I only redeemed myself with two wins on Monday.  I don't know if I was too embarrassed or just plain fed up to even blog about the tournament.

Off on a tangent there. Back to resuming my travels.  Despite my life being filled with non-chess things such as cycling and Tae Kwon Do, I decided I missed the enjoyment of getting away for awhile and playing a little chess.  If all else fails, I know I will enjoy seeing old friends and meeting some new ones. 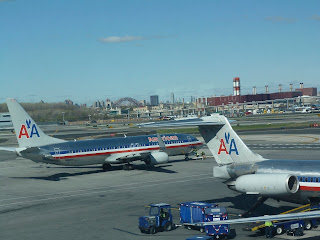 Plane to see, Polly's leaving on a jet plane.

I flew to Seattle yesterday, via Chicago.  For a change I got out to Seattle in the early evening instead of the middle of the night.  By the time I got to my hotel my body was telling me it was 10:30 pm, but it was only 7:30.  I couldn't exactly go to bed.  Also I've been participating in the 100 Day Challenge.  This challenge simply is doing some sort of exercise for at least 30 minutes a day.  I don't count wandering around airport terminals as real exercise.  Yesterday I had not done any real exercise, so I took a nice walk in Seattle.  I carried my little point and shoot camera with me.  Damn, some of these pictures are as good as some of the ones I take with my fancy DSLR. 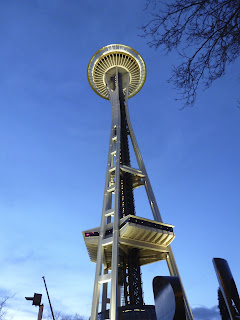 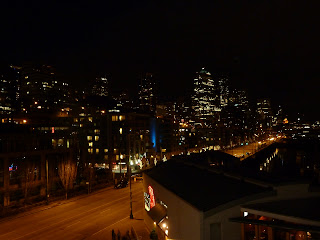 Today I had a very uneventful ferry ride from Seattle to Victoria.  Thankfully no detours like two years ago.   I sat with friends I had met last year at the tournament.  It's a bit colder this year since Easter is earlier this year.  I did not spent quite so much time on the outside deck taking pictures. 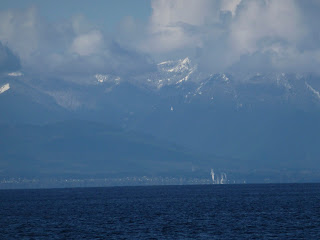 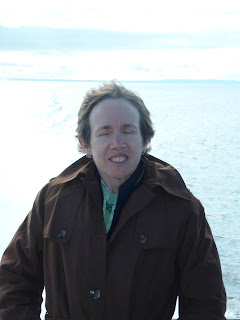 Baby, it's cold outside!

Not the best shot I've had taken of me.  I didn't even bother to look to see if the picture was any good or not.  It's one of my classic closed eyes shots that usually would be rejected and retaken until my eyes are open.  However I didn't want to make the kind stranger do another shot.

I'm enjoying the quiet of my hotel room at the moment.  The lobby is overflowing with little chess playing munchkins.  They have a kids event before the main event starts this evening.  Canadian scholastic events aren't much different then United States events.  Lots of kids running around and frazzled parents near by.

....did not occur on December 31st.  I passed on my usual New Year's Eve "cracktion" fix at "Your Last Blunder of ____".  That's because I had to make a choice between chess and cycling.  After several years hiatus, I've renewed my passion for cycling.  Before I started writing this chess blog, I wrote a triathlon/ cycling log.  Still Tri-ing After All These Years.  A number of things led to my lack of enthusiasm for cycling and doing triathlons.  It's a long story that I don't want to bore you with.  Chess and Tae Kwon Do filled up a lot of the time I used to devote to cycling and triathlons.

I started cycling again this spring with the idea of simply improving my physical conditioning for Tae Kwon Do and chess.  I never thought I would get back to the cycling condition I was in back in 2005, but I have.  It's been gratifying to know that six years older I could still ride fast. So with the temperature being the 50s on December 31st, I chose to go riding with my weekend training group.

In my last post I referred to the light at the end of the tunnel.  It wasn't a train coming the other direction culminating in one of my infamous train wreck stories.  I finally got my rating back over 1800 for the first time since 1996.  I had two good tournaments in a row.  I went 3-0 in one tournament to go from 1703 to 1774. Three days later I played at the Marshall Chess Club and finally broke my 14 game losing steak at the club.  I got an even score and jumped from 1774 to 1810.

It would have been nice to end 2011 with my rating at 1810, unfortunately the following week there was an odd number at my club and I had to put myself into the tournament.  It was one of those nights where I did not feel like playing.  I was tired, and admittedly I think I wanted to sit on my 1800 rating for awhile.  I started out with two horrible games where I got smashed.  I thought to myself "Here we go again.  Back to playing like an idiot."  However in the last round I managed to redeem myself with this entertaining game.


It wasn't a brilliant game, but it at least stopped the bleeding of rating points. I dropped 19 points to end 2011 at 1791.  Not a bad finish considering miserable my record was for most of 2011.  I did recoup a few points in my first tournament of 2012.  I didn't play any more games before the cut off for the February rating list so my published rating will be 1796.  I don't plan to play in any under 1800 sections any time soon.  In fact I'm not even playing in an Under 1900 section any time soon.

I'm off to Philadelphia on Saturday afternoon to play in the Liberty Bell Open.  Like last year I'm planning to play in the Under 2100 section.  I can't make it down in time to play all the rounds of the three day schedule.  Instead of subjecting myself to the insanity of playing 4 games at game/35 in the two day schedule on Sunday, I'm taking byes for the first two rounds and then playing five rounds at the more civilized time control of 40/2 SD/1.  Even though I've had some good results at the faster time controls, I'm looking forward to having time to really think.