It was no April Fools joke about my 1800 rating.  I left with one of my typical time pressure train wreck positions.  I'm wondering to myself, will people think I do nothing on this blog except show butt ass ugly losses?  Are there any wins out there that are worth sharing?  The answer is yes.

As I mentioned in the previous post, losing that 2nd round game was pretty disheartening.  I have been continually frustrated with my inability to put such games behind me and move on.  Somehow on that particular Monday I moved on.  On any given Monday I go to the Bob Peretz Chess Club to run our Monday action tournament(3 rounds, game/25; 5 second delay), not knowing whether or not I'll need to play.  If an even number of players show up, I'll sit it out so no one gets a bye.  If an odd number of players show up, I'll play.  There are some Mondays where I'm hoping like crazy that we have an even number so I don't have to play.  I think it was one of those Mondays where I would have been just as happy playing Scrabble on my iPad or reading Facebook posts then playing chess.

Sometimes it's best to be pushed into something that one would rather not do.  So here I am on a night where I'd rather not be playing, and I've just lost my 28th game to Guy.  Now I have to play another kid who is currently ranked #5 amongst 8 year olds in the United States.  Long time readers know my stories about playing little kids.  However this post is not one of my "kid encounters of the third kind".  No annoying quirks or other silly nonsense.  In fact my young opponent score 10 out of 10 on the politeness scale.  Here's a kid before the game who looks me in the eye, confidently says "good luck" and gives a good firm handshake.  No "dead fish" handshake that I often get from kids.  At the end of the game another firm handshake and "good game."

Here's the game. My even score for that Monday night would bump my rating from 1700 to 1706. A very modest gain, but it was the start of something more to come.
Posted by Polly at 5:50 PM 3 comments:

Today is April 1st, and the April rating list is now in affect.  For the first time since February 1997 I have a published rating over 1800.  I don't even want to count that month because I was at my floor of 1800. They lowered the floor by 100 points and by April of 1997 I was sitting at 1702.  To save you the trouble of going to the USCF website and checking on me, I offer the following: 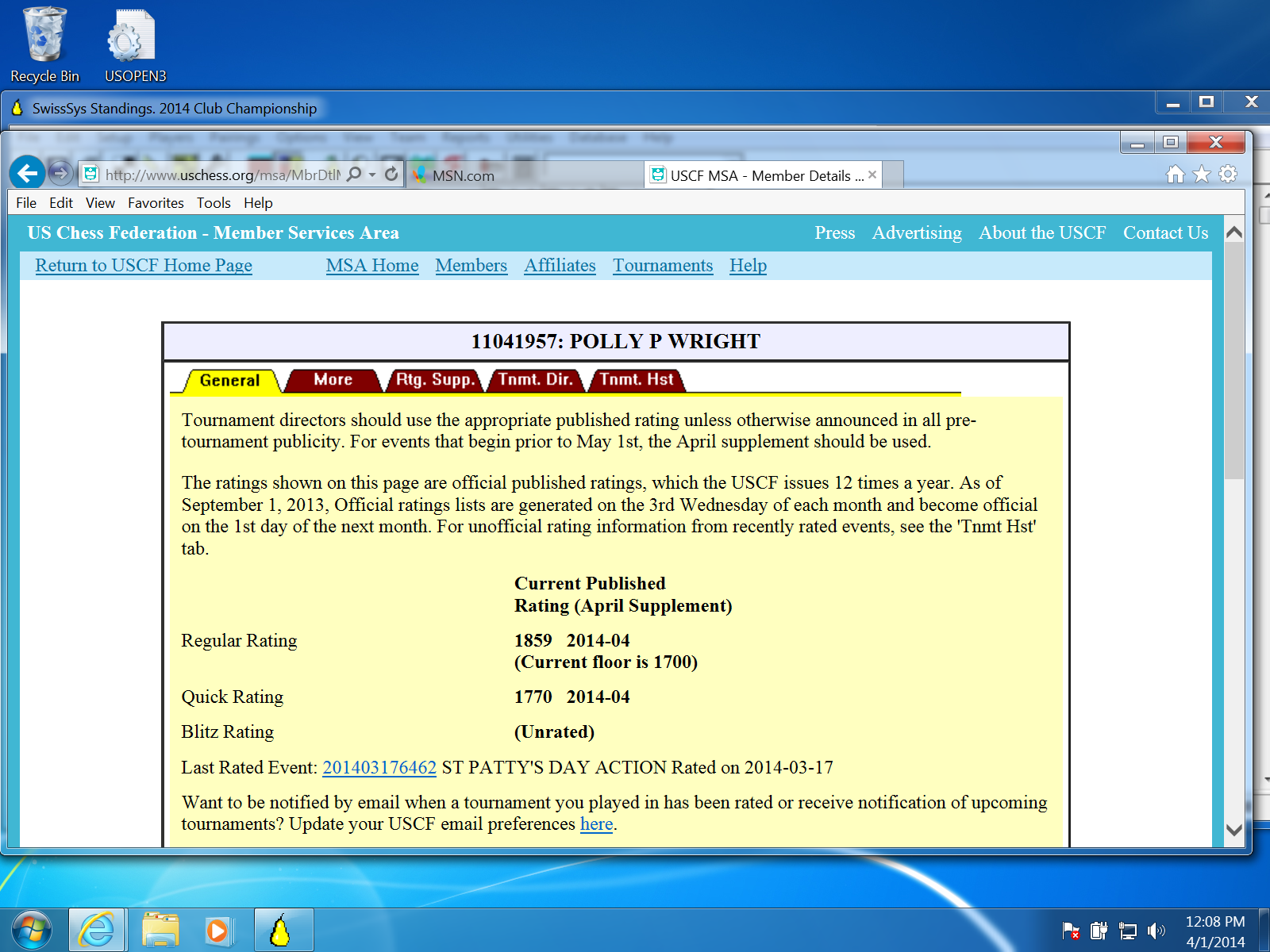 If you're wondering whether or not I've been doing loads of hardcore studying and brushing up on tactics, the answer is no.  Despite the miserable ending of 2013 where I scored a miserable 1/2 point (a 1/2 pointed that I lucked into in a hopelessly lost position) out of the last 5 games I played that year, I did not make any bold New Years resolutions such as "I'm going to study chess everyday for an hour."  Even a little resolution such as "I will work on 5 tactics problems a day" was not promised.  I don't make New Year's resolutions because all I would do is not keep them and then beat up on myself for not sticking to them. I'm not even sticking so well to promise to myself to write more often.

My first tournament of 2014 had the potential of being special.  I drew with an 1800 in round 1 and beat another 1800 in round 3.  Unfortunately sandwiched between those games was one of my usual time pressure induced implosions again Guy Colas.  He's beaten me more times then his son Josh has.  His son is rated 2350 or so.  Admittedly Guy and I have played each other more often then Josh and I have.  However I've lost to Guy 28 times and to Josh 23 times.  It seemed like I could win the game.  But with a second left on my clock I had this position: 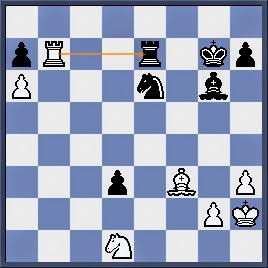 He just played 57. Rb7.  I replied 57...Kf6.  The game continued 58. Ne3, Nd4?? 59. Nd5+! The clock resigned for me.  Usually a game like that would leave me totally discouraged for the last round.  However somehow I had some fight left in me and won the last round against a young kid who out rated me by a good 100 points.

Stay tuned for more details.
Posted by Polly at 12:32 AM No comments: