Light At The End of The Tunnel

I told you it wouldn't be three months before you would hear from me again.  In fact it's actually less then three weeks.  When I last posted I was bemoaning the fact that I seemed to have totally forgotten how play the game.  From September 12th to December 1st I made it down to the Marshall Chess Club four times to play in the Thursday Night "cracktion" tournament, otherwise known as "Four Rated Games Tonight!" or once a month "10 Grand Prix Points Tonight!" I played a total of 13 games, and I won a total of zero games. Yep, you read that correctly. Zero wins! 13 losses! Not a draw in sight.  Most of the games were miserable games where I got a lousy position early on and get crushed either very quickly or slowly grounded down.

If anyone is half-way decent at math he might notice that 4 rated games tonight x 4 = 16.  So what happened to the other 3 games?  One night I opted for the pre-emptive last round bye since I was the lowest rated player and didn't want to deal with possibly getting a bye in round 2 or 3.  The other two times, I dropped out so I could make an earlier train.  What happened to the woman who refused to drop out when having a bad tournament? She left the building in disgust.  One night I resigned after dropping a pawn early because I didn't feel like playing out a long drawn out game down a pawn. Instead I made the 10:32 train.  That's two hours earlier then if I stayed and played the last round.

On that early train ride home I seriously started asking myself "Why are you doing this? You spend $11 on train fare, another $4.50 on the subway, and a $25 entry fee. Why travel into Manhattan to get abused over the chess board? You can stay home and play Monday evenings in White Plains.  So why?"

I concluded there were several reasons why I needed those trips to the Marshall Chess Club.  I don't need them every week like I was doing the last few years. I needed them at least once a month to remind myself  what it's like to see and attempt to play real chess.  I need to spend time hanging out with chess players over the age 30.  When one spends her days teaching chess to kindergartners, first and second graders after awhile it's easy to forget what real chess is. The other big reason to go to the Marshall is, I'm not in charge.  I don't have to deal with the players whining about which ratings are being used, or why they got two blacks in a row, or one player calling another player an @$$ #%!*.  I can simply show up, pay my entry fee and let Steve deal with the knuckleheads.

It's been a strange year for me chess wise.  I skipped the US Open and the New York State Championships for the first time in years. I spent Labor day weekend in San Diego celebrating my niece's 30th birthday.  I could have played in the Southern California Labor Day weekend tournament. It was in San Diego.  I actually contemplated playing the two day schedule, but decided just hanging out with my nieces and nephew would be be more fun.  After my last trip in October with my sisters, I decided I had taken enough plane flights.  There was nowhere I wanted to go.  The thought briefly entered my mind to find a state that I haven't played in, but that will have to wait.  I'm stuck at 26 and counting.

Although I'm doing a lot of non-chess activity.  I've gone back to riding my bike and contemplating a triathlon comeback for next year.  I'm working towards my Second Dan Black Belt in Tae Kwon Do.  That also will probably come next year.

I will end this post by sharing a game played a few Mondays ago.  It was another case of muddling through the opening and trying to hang on for dear life as my opponent tried to attack the crap out me from the Black side. On that particular night I ended every game with one or less seconds on my clock.  Unfortunately it's not a complete score sheet, but I do have a diagram of the final position.  Don't ask me how we got to that position from where the notation stopped.


Having survived an unsound sac with one second on my clock, I managed to bang out another who knows how more moves to arrive at this final position. A flurry of rook and queen checks allowed me to arrive at this lovely finish. 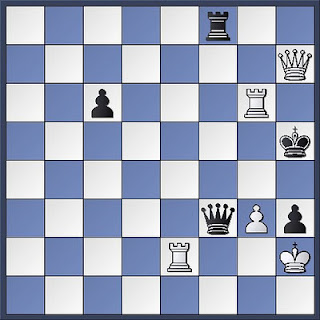 Despite going down to the Marshall that same week and losing another three games, I felt perhaps there was a little fight left me.  Also knowing why I wanted to be there helped make peace with the inner demons who ask "Why bother?"

Let's see, I think I remember that game.  That's the one with the little horsey that moves in an L shape and can jump over other pieces, right?  Bishops are the pointy headed guys that move diagonal, and rooks are those castle like things that move straight?  The queen can move like the castle and pointy headed guy?  The king...that's the piece that can't get captured?  Then there's those round headed guys that cheat because they move one way and capture another way.   Pawns?  Okay I've got my games squared away.

Sometimes I feel like I've totally forgotten how to play chess.  I know how the pieces move, but lately I just don't know what to do with them.  Have I been overexposed to six year old kids that no matter how many times I tell them only knights can jump, still move bishops without moving any pawns?  Maybe it's the kid who no matter how many times I tell him to move the e or d pawn first, insists on playing 1. h4 followed by 2. Rh2.  I suppose it's fitting that I lost last night to someone who opened 1. a4.  I think he really wanted to be black so he wasted a move to let me be "white".  Not that I can blame him.  The two games I played as white were just butt ass ugly.  Maybe he figured he have an easier time against me if he just tossed the tempo and pretended to be "black".  I didn't disappoint.  I tossed the exchange on move 23, and by move 25 managed to turn my disadvantage into a full rook.

Right now I'm wrestling with what I want from chess.  I've got some ideas.  I think I finally figured out why I subject myself to trips to New City to get smashed by experts and A players on Thursday nights.  More on my midnight musings on Metro North in my next post. Yes there will be a next post, and it won't take another 3 months for it to appear.  I just wanted get a few words out to let people know, I am amongst the living.
Posted by Polly at 12:52 AM 5 comments: