A Guilt Free Win On Time

Last night was my night to redeem myself. It was my chance to overcome my terrible 0.5 - 2.5 start in the tournament by winning a third game in a row. It was a chance to purge those feelings of guilt that I felt from the previous two wins. Once again it came down to a rousing game of "Beat the clock" or "Watch me pull a rabbit out of my hat!" 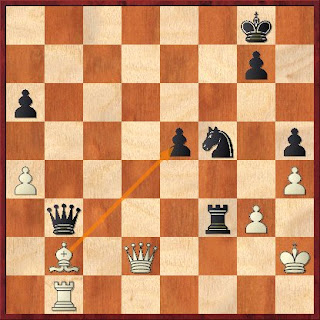 There was nothing I could do about his threat of Rxg3 so I played Qd2 hoping maybe I could get some play on his back rank. He must have thought there was more to it then there really was because he played Qd3 offering to trade queens.

Here's the game up to the point I stopped notating. When he ran out of time I had the g and h pawns cruising up the board. The next 30 moves were played with me only using another 3 seconds of time.

I didn't feel the least bit guilty about winning this game on time. First of all I'm totally won, and second of all he had me several different ways, but got scared. Scared doesn't win chess games. We both played sloppy at times, and he missed two big chances to make my life totally miserable. Time delay is a wonderful thing.

Hi Polly,
Looks like we are scheduled to play this week. I am free Monday, Wednesday or Thursday evening. Preferrably after 9PM so I can make sure Blunderdaughter is in bed... but am a little fliexible if you want earlier.

Hi Polly, I hope you don't mind but I had a few questions for you since you're experienced both playing in and directing tourneys. I read the USCF rulebook but some things are still unclear:

2. If they violate the touch-move rule, how do you handle it? Is it worth calling the TD since they'll decline your claim unless you can prove it anyway?

3. If an observer is interfering or disturbing you, can you stop the clock to tell the TD? In one case I remember you told them to back off but otherwise put up with it. I read if you stop your clock for the wrong reasons you could face a 2 minute penalty, which would be horrible in SD time controls!