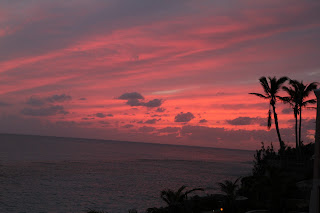 Sun sets on another Bermuda Open
Tomorrow this road warrior is off to Parsippany, New Jersey for the 41st Annual US Amateur Team - East.  Once again I will be playing 1st board for my team.  The good news is I don't have any physical issues plaguing me.  The bad news is I don't have any physical issues that would give our team an assigned board in the ballroom all tournament.  That means we will most likely bounce around between the ballroom and the outer rooms, depending on how we're doing.

Enough about the team tournament.  Inquiring readers want to know about how Bermuda went. The good news is, I won $50.  The bad news is, I was in a tie for 2nd Under 1800 after a butt ass ugly loss in the last round.  In the last round I got paired against someone from my own club.  Like I really need to travel all the way to Bermuda to play someone from my club.  However in the last round they really don't want to be shifting pairings around to avoid such a match up.  I really didn't want to play him, but I wasn't going to ask the director to change the pairing.  Unfortunately I think I let the pairing upset me too much because I ended out losing a piece on the 11th move.  It just went downhill from there.  I'm not even going waste my readers' time by showing the game.  There was nothing entertaining about the loss.  There isn't even a good train wreck story behind it. 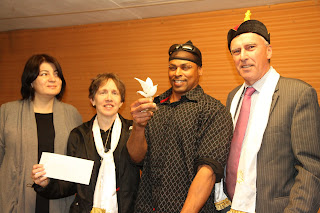 No Bermuda longtail for me this year.
Saturday's games combined took less time then Friday evening's game.  Round two's ugly loss took an hour and 41 minutes.  It would have taken about 40 minutes if the weather had been better.  My ugly win took even less time. One hour and 35 minutes.  Winning ugly and quickly sure beats losing ugly and quickly.  Here is my ugly win.  Both of us moved too fast.


After the fast loss on Saturday, I said to someone "Knowing my luck, Sunday I'll have a four hour game when the weather is better."  I know my luck.  Sure enough we played for almost four and half hours.  I got paired against Ken Sloan who I've known for a very long time.  We've been at many of the same tournaments but this was the first time we ever played.  I won a pawn, but got sloppy in my attack.  I sac'ed the exchange thinking I was getting it right back.  It was one of those cases of not visualizing what the board would like like after I moved my rook.  With no rook on d7, e6 is now covered by his queen.  I had a lot of play for being down the exchange, especially after I picked up a second pawn.  I didn't see the h4 break so I ended out just repeating the position and taking the half point. Here's Sunday's marathon.


As usual the tournament ended with dinner, blitz playoffs and awards.  There were 5 players tied for 1st.  The top player wins a trip back the following year.  That gets settled by a blitz playoff.  With 5 players in the tie it ended out being a round robin.  GM Larry Christiansen won the playoff for the return trip.  GM Alexander Ivanov got the Bermuda longtail on tiebreaks. 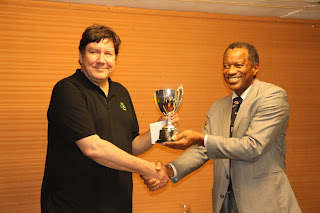 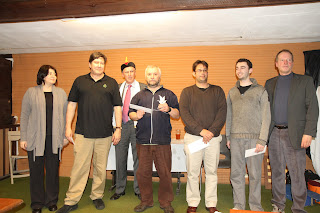 The top scoring non-titled player also wins a return trip to next year's event.  There was the potential of an 11 way tie for that prize but thankfully Martin Huba won his game to take clear 1st in that category.  It would have been brutal having a playoff with 11 players.  We wouldn't have gotten out of there until the wee hours of the morning.  At that point I probably would not have gone to bed since I had to leave for the airport at 6:15 am. 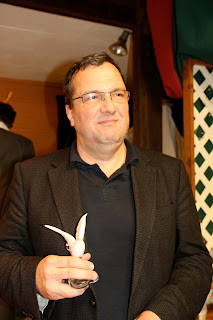 Martin Huba
Bermuda longtail and a return trip
There are various special awards including one for the player traveling the longest distance.  This year the winner of that award was Stephen Kisuke of Uganda.  He received a glass angel fish.  The hand blown glass pieces they give out are just beautiful.  Maybe I'll have to move to Australia and then come back for the tournament.  I'm sure never going to win distance award flying from New York to Bermuda.  I got the walloping 1500 frequent flier miles for that round trip. 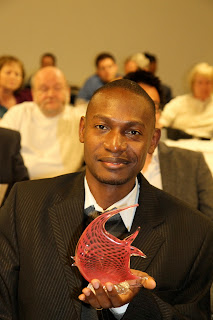 Stephen Kisuke of Uganda
Next report from beautiful Parsippany, New Jersey.
Posted by Polly at 11:30 PM

There is no official coverage of USATE. How about basic stuff like number of pre-entries?

polly, i am there... at USATE playing, for one of several teams of the NJ, East Orange Chess Club.

is reAssembler or Blunderrpone there, never met prior..... if see him, pls give my regards!

i moved back east to help take care of my mom, and over two years, couldnt find a job.... you saw me the two days, that Friday, after all this started.

...tried to email your hotmail when i got here in nov, no reply :)

Congrats with your prize. Bermuda seems to be your tournament, you have always a prize. :-)

They give lots of prizes. As the organizer likes to say "Come to Bermuda and win a prize."