Time To Move On

Sometimes there comes a time in one's life when some thing or person had become one's consuming passion to the detriment of other life pursuits. I am one of these people who tends to take things way too seriously. If it's not chess, it triathlon. If it's not triathlon the it's something else. The triathlon scene has left me frustrated since I'm incapable of running any sort of distance or speed with out my knees and hips sounding the sound track for a Rice Krispies ad. (Snap crackle and pop.) From 2002 tp 2005 I had incredible results. Top 3 finishes in my age group in all my races with the exception the national and world championships. There I'm way out of my league. I did 3 races in 2006 and 1 race in 2007. All my results sucked. I didn't finish DFL (dead f-ing last) in any of them, but I was just some random racing lurking towards the middle to back. Sometimes I think I'd be happier coming in DFL because there's a certain notoriety to be the last person across the finish line. Maybe I just crave the attention. 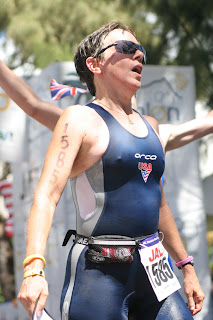 This picture of me after finishing the 2005 Age Group World Championships summarizes all that I felt at the time. I was physically and emotionally fried. 85 degrees with humidity to match. I had great plans for 2006, but life got in the way in the form of a bike accident that left me with 3 broken ribs, and 10 days later the sudden passing of my father. 2007 I had recovered physically, but mentally I was not there. 2008 has been much the same thing. I'm limited by my running, so I just don't give a crap. I can't accept not placing high in my age group. It sucked in Seville by totally humiliating myself in the marathon. I was so freaking slow, that even the sweep vehicle that accompanies the last runner gave up on me. Stuff happens, but left a bad feeling. I've only recently started trying to speed walk again.
So what does all this having to do with chess? Maybe nothing. Maybe I'm doing a Chess Loser random crap post. However chess got me through a lot of the physical and emotional angst that had gone on during my descent into triathlon mediocrity. But chess has it's own issues. Why do I accept losing at chess as normal, but at the same time agonize over draws that I didn't take and moves I didn't make? 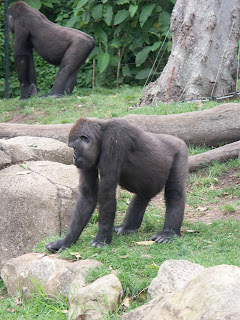 Why do I let little kids and old men become the proverbial monkeys on my back? Why can't I just move on?
Chess at times is an accident waiting to happen. The game gets out of control and the wheels come off and I feel like this guy. 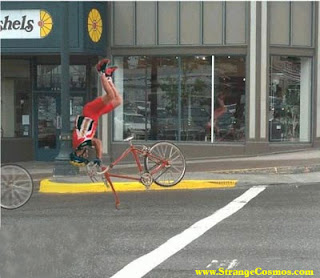 God only knows what he was thinking about as he was flying through the air. Some how I don't think it was "I'll get back on the bike and finish the race. No problem!" But if he was conscious after he hit the pavement, I'm sure his first question was "Is my bike okay?" However when we do the chess equivalent of a header, that's exactly what we do. We put the "bike" (our game and self esteem) back together and limp through the next round of the tournament. Sometimes we can overcome the big chess mishap, other times stuff keeps falling apart. As I've struggled with the second guessing, and beating up on myself I realize that there is more to life then this crazy game, and perhaps it's time to move on to bigger and better things. 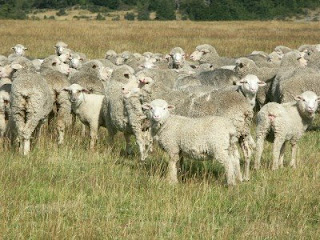 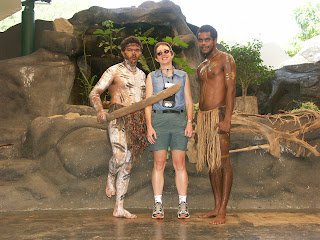 How about running away with an aboriginal tribe in Australia? 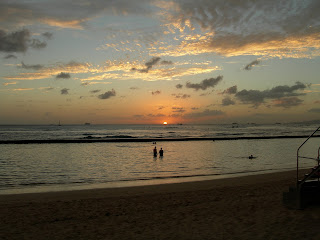 Maybe it's time to ride off into the blogging sunset, and do something more constructive with my time...... 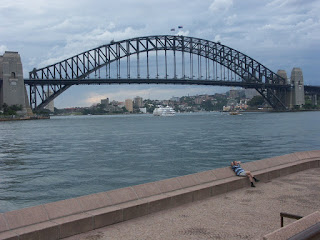 I'll cross the bridge when I get to it. I'm kind of like the guy in the foreground. I'm in no hurry to get to the bridge. Though my thoughts were serious here, but the idea of quitting my blog or giving up chess;

Look at the date;

you look svelt and buf in that photo girl!

Life very often than not, throws us a huge curve at the most inopportune moment that it knocks us off-balance, ruining all our plans, our dreams, our hopes.

It just happens. No one can know what life has in prepared for us. The main thing is to be able to bounce back again.

One thing that chess has taught me is that everything will be alright again. As Topalov says it,"You have a bad day but tomorrow you get your pieces back again. And you try again."

Btw, that last picture of the guy in the foreground is taken from the Opera House and the background is that of Sydney's Harbour Bridge or as we call it, the Coathanger. :)

I work in an office very near the Harbour Bridge (without the magnificent view from my workstation unfortunately).

Happy: I put that last picture up especially for you. :-) I took that shot while walking around by the Opera House. I knew you'd recognize the location.

I love the Topalov quote. It reminds me of a discussion I had yesterday with some of the kids from one of my chess classes. One kid kept telling the other kids that resigning is the king committing suicide. I said no it's not because when somebody resigns he can start over again. He kept insisting it was king suicide. I don't think he quite grasped the finality of suicide versus getting a fresh start in a new game.

You had me going, there. I was going to cry. First BDK, then Samurai Knight, now Polly. I was beginning to feel like Samwise Ganges at the shore when the elves and Frodo were leaving for the West. Cyberspace has too much space to fill and it feels cold without the brilliant spots.

You got me there for a second. Glad to hear it was only an April fool's thing.

you had me nervous for a second, nicely done.

and as for the whole post in general, it's like you were in my mind there, good points and reflection...

as for races, i was pack fodder, in it not for the win, i knew there would be no such thing, but to be part of the bigger picture, part of the group. one reason i play chess...

Relax gang. I'm not going anywhere, but I couldn't resist having a little April Fools fun. It was a good excuse to post some of the photos I've taken on my travels. I was tempted to write something totally absurd about winning a tournament by beating masters, but that would have been too obvious.

Dario: My schedule is really hectic so I'll be arriving at the club at the normal time. We can play after the 4th round is done if it's not too late, or play next week.

nice one, polly. i totally forgot abt Apr 1. duh. u got me there. lol