After a delightful 5 days in Chicago, I arrived in Indianapolis late last night. I came down here by train. It was a slow, but relaxing alternative to getting on another airplane. Besides $38 round trip on Amtrak was a lot cheaper then flying to Indianapolis and back to Chicago. Here's the picture tour of Chicago. 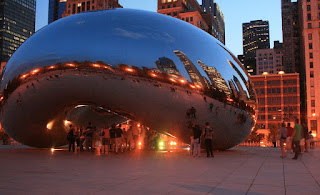 We visited the Chicago Art Institute several times. This museum the home of this famous painting. 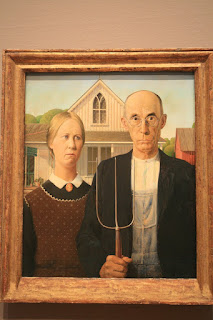 American Gothic
The chess set below was for sale in the gift shop. It's a rather cool set with curved squares and rounded bottoms on the pieces. The pieces rock and roll on their squares. The person who set the display is not a chess player. What's wrong with this picture? 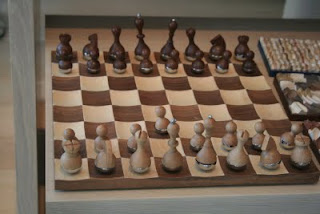 What color square should be to my right?
At the hotel I was staying at they had the exact same set in the lobby. I think the same person set it up there. At the hotel I moved the board and changed the pieces around. At the museum I decided the people in the gift shop might not like it if I started rearranging their display. I left it as is. 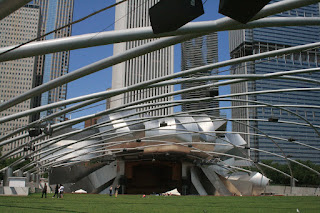 This is the most amazing place I've ever seen an outdoor performance. When I had first seen several years ago, I thought it was some strange sculpture. However on those beams are speakers, and the sound is amazing. We caught the tail end of a concert on Saturday night. Monday night we returned to see a performance of Handel's opera Acis and Galatea. I was familiar with this work, but it quite enjoyable. This was the first time an opera has been staged at the Pritzker Pavilion. Here's one of the pictures I took. 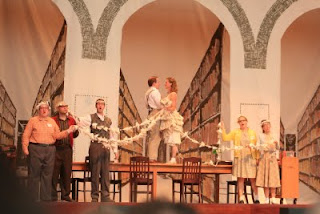 Scene from Handel's Acis and Galatea
Along with culture, we took in a White Sox game at US Cellular Field. Hard to spit that out after years of Cominsky Park being the White Sox home. 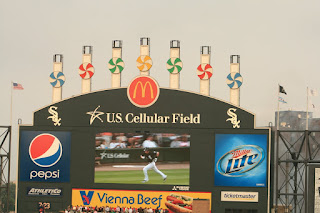 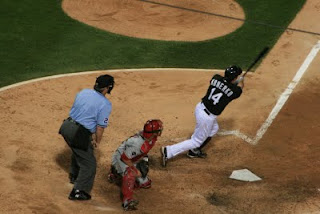 The White Sox won in the bottom of the ninth in tie game. It was a good game. That is not the winning hit. That's just one of the pictures I took during the game. 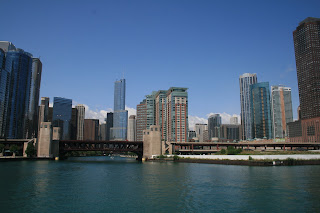 Chicago skyline as seen from the river.
Oh yes, I'm at the US Open. My first round wasn't until 2:00 pm. There are all sorts of workshops and meetings during the tournament. I attended the rules workshop where we discussed some of the various proposals that will be voted on by the delegates over the weekend. 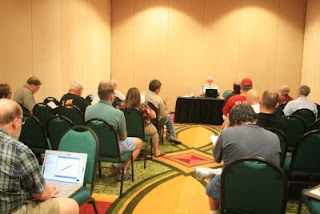 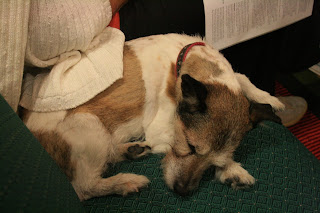 This attendee was bored with the discussion. 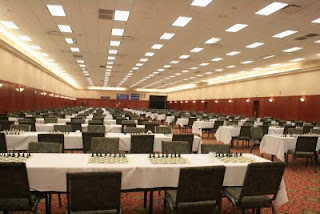 Empty playing hall. Very nice lighting!
In my next post I'll take another picture at the start of the round.

In the US Open one of two things happens to me in the first round. I either miss the break and get paired up against a grandmaster or international master or I make the break and get paired way down. After two straight years of being fed to the lions, I got paired down. If one more player higher rated then me had entered, I would have played Grandmaster Julio Becerra. Getting paired down was no bargain. The problem was I got paired down against an unrated who is visiting from Russia. I did draw the game. His provisional rating based on his first 15 games in the US is 1749. I will post it on Checkmate State by State since it is my first game in Indiana. 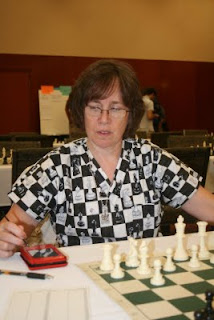 Getting ready for round one.
Being right at the break is bad because it leads to extreme pairings. In round two I was paired against IM Ron Burnett. The problem was he had taken a bye in round one, and was stuck in traffic. I hate forfeit wins so I was getting rather agitated as the minutes passed. I was wandering around when he finally showed up. He showed up 54 minutes late for a game that had a time control of game/60. I was actually glad he made it. I'd rather play and lose against an IM then win on forfeit, and start the tournament with 1.5 out of 2. I'd like to say that I was able to take advantage of the big time edge. However that was not the case. I will post the game later.

Like last year I'm using the free Internet access downstairs instead of paying $10 in my room. It's getting late so I'm not posting games on this report. Here are a few pictures I took today. 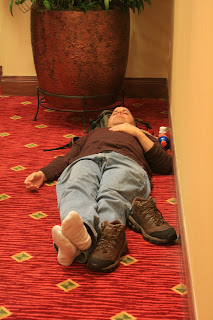 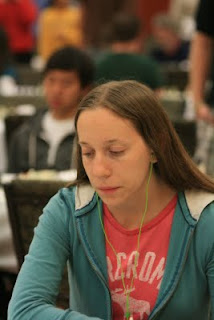 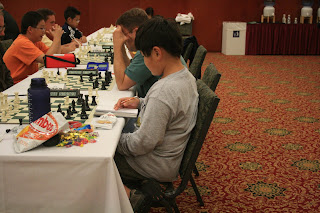 Well provisioned for a long round! 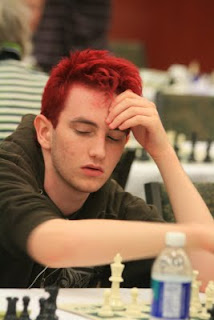 Redheads have more fun?
Stay tuned for more updates. There are three schedules going on simultaneously so I have no idea who is in which schedule and who might be ahead. After the merge tomorrow, I'll have more of a clue. Tomorrow will be a rough day for me. I have 4 more games. Three will be Game/60 and the fourth game will be the standard 40/2 followed by game/60. I'll probably get paired way down since I have one point. (Two draws)
Posted by Polly at 11:37 PM

Hopefully you will atleast have 50 percent when you enter the long games.

gotta love it, the atomspshere that surrounds any US Chess Open.

BTW, like the chess shirt you're weaing , is this available for men and where did you buy it on line ?

Their board is correct. Black belongs to the right.

Anon: Maybe that explains why I can't play this game. I've had the board set up wrong all these years. :-)