Last night I got home from a rough night at the Marshall. (Details at a later date.) As is my normal custom before going to bed, I checked my email and Facebook page. I was shocked to see various Facebook friends make reference to the passing of Jerry Hanken. I knew he had not been well when he missed his first US Open in decades this summer. He had played in 36 in a row, and 42 in total. However it felt strange to read his October Chess Life article about the World Open in the morning, and read of his passing that same night.

Jerry was passionate about chess. He loved to play. He loved the tournament scene. He loved the chess political scene. He loved chess people, and had a big heart. Despite knowing him for 35 years, I had no idea that he had performed in amateur productions of plays until reading the obit on the USCF website. I guess it shouldn't really surprise me, because he was just one of those energetic persons who could just overwhelm you with his outgoing personality. One did not have to see Jerry to know that he was around. His voice carried, and one would say "There's Jerry telling another one of his chess stories."

It was at my first US Open back in 1976 when I first met Jerry. It was not only my first US Open, but it was my first exposure to the US chess political scene, otherwise known as the Delegates Meeting. I was representing Vermont where I was attending college at the time. It would be the first time Vermont had been represented at the meeting. I don't remember what issues were being argued at the time. What I do remember was lots of very heated debates, and a very loud and often angry Jerry Hanken raising a point of personal privilege over some remark directed towards him. I remember at the time wondering to myself , "Who IS this guy, and what the heck is going on?" One thing about Jerry, he was never afraid to speak his mind.

I got to know Jerry better over subsequent US Opens, and under much calmer circumstances then the Delegates meeting. We spent a lot of time together at the 1978 US Open in Phoenix. Almost every night after our games were done, a group of us would go find some restaurant that stayed open past 11:00 pm. Jerry seemed to know where to find the good food and drink. I probably gained 10 pound during those two weeks in Phoenix. We had discussed plans of doing some sightseeing around the Phoenix area during the day. However when the daytime temperatures hit 100+ degrees everyday, sightseeing consisted of going to the movies or hanging out by the hotel pool.

Jerry loved the US Open and had formed a committee to try to bring back some of its glory from the earlier years. Attendance has been going down every year recently, and he wanted to come up with ideas to boost it back up. This year attendance did go back over 400 in Indianapolis. In the bulletins he wrote a column called Hanken's Corner. Sometimes it was rather mundane, at other times it had amusing stories and interesting pieces of US Open trivia.

In 2001 I played in my first US Open in 10 years. So who did I have to play in round one? You guessed it. Jerry Hanken. This was the first and last time we ever played. During our game he was furiously trying to write his "Hanken's Corner" for the first bulletin. He asked me if I would mind if he did so. I didn't mind, and perhaps it would give me a good chance for an upset if he was concentrating more on his writing more then the game itself.

Here are a couple of excerpts from that column.

"It starts again! Your Humble Reporter (henceforth known as YHR) is playing the first round of the 102nd US Open. This year we are in Framingham, Mass, near historic Boston..."

"As is tediously usual, this column will follow the Pilgrim's Progress of that immortal quest. Along with Ye Kindly Editor, Phil Smith (known hence forth as YKE) we will also make an attempt to amuse and entertain you Gentle Readers with anecdotes and wry stories from the tournament......" "PS. As I was writing this column at the board (with my opponent, Polly Wright's permission) I achieved a completely lost game. Not atypical for first round games for YHR. I lucked out and did win, however. Check out the game with notes by Art Bisguier, who forcefully demonstrated the win."

Here is the game with the original notes from Jerry and Art.


The last time I saw Jerry was at the 2008 US Open in Dallas. Despite a lack of mobility he managed to keep a very busy schedule of writing his columns, chairing a number of committee meetings, and playing chess. In my reports from last year's US Open I wrote about one our funny late night encounters.

I didn't always agree with Jerry, but he really had a heart of gold shared his passion for chess with anyone who would listen. You either loved him or hated him, but the US chess scene will be a little emptier without him around to share his wit and wisdom. Thanks Jerry for being a good friend all these years, and I guess I'll have to wait for the big chess tournament in the sky to get my rematch. 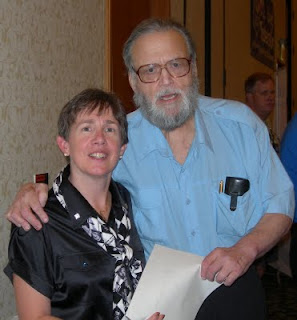 I'm sure he would be proud of such a post.

The only thing Jerry ever said to me, at my second tournament, in '93, was "Please!" as in please get lost, after I asked him why he didn't make a move during a postmortem between him and his opponent, on a stone table outside. He didn't look at me even though I had been watching for a while. I think the other guy finally answered my question, though.

He seemed irritated in general "I could be spending my Sundays watching football instead", don't know if that was in reference to quitting in some tournament director type capacity or whatnot.

I'm sure he was a great guy, but sometimes, you don't get a second chance to make a first impression. That's about as much as I know about him personally other than his Chess Life articles.

Blah, blah, blah, he was a great guy, I couldn't tell you one way or the other, but he seemed like an interesting character, a fun guy to have around a tournament - he cracked a lot of jokes.

Linux: He could be rather gruff at times, and his remark was probably was more out of frustration then anything personal.

I've seen plenty of players get annoyed when some unknown person asks them why they didn't play a particular move, or throw in unsolicited analysis.

My first impression at the delegates meeting wasn't that hot either, but circumstances led to meeting him in calmer settings. He was indeed a complex man who showed his passions in a rather outspoken manner. People either loved his style or thought he was a pompous ass.

Probably some people would be insulted that he would spend a tournament game working on a column. He had the decency to ask me if it was okay, and I'm sure if I had said no he would have respected my wishes. But to me that was Jerry being Jerry trying to do too many things at once, so I let him be.

Many people have never met the man so his Chess Life articles are their only peek into his chess life. Yes he was an interesting character, who was the life of the "chess party".

This piece was simply a bit of my history with him. I'm sorry you didn't get the second chance.

Proberly sorting a tournament in heaven as we speak.

Every country has chess people like this they are what makes this a great game,the people.

Chessx: It's funny that you mention that. On a post I wrote in the USCF forums, I ended it with the following:

RIP my friend, and get the organization going to get the first Annual Heaven Open rolling. I'm in no hurry to enter.

Here's a modification on the old baseball in heaven story.

Two old guys love traveling to tournaments together, and playing any chance they could. One day Jerry passed away, His old buddy is sitting in the park, and Jerry appears to him.

His old friend says "Jerry. What's heaven like? Does anybody play chess up there?"

"Oh yes, there are casual games going on all the time. Many famous grandmasters hang out, play blitz, and give lessons. In fact we have tournaments every week!! By the way I've got good news, and bad news."

"We have a new tournament starting tomorrow night!"

"You have Black on board one against Fischer in round 1"

The other guy asked my rating when I interjected, so when I replied that it was provisional and 1300ish, it must have added to the sense that I was a gadfly (not that it would matter to me, if I were them, but I get your point that some people can be like that). Doesn't matter now, I forgive him for it.

That would be neat to play Fischer in heaven. I guess I'd play against his Najdorf Sicilian, if I were White, and perhaps a KIA against my French, if I were Black (just played one yesterday).

I think Jerry's opening was 1.c4. He seemed to like a strategic game, not rushing into things tactically. He was at least an Expert or a Master even way back then.

He shall not be forgotten by the americain chess players.

Linux: Yes he was a big English player, which I had either forgotten about or wasn't aware of when I played him. It's kind of funny that I got such a good position playing the English against him. Though I often find it harder playing against my openings.